It has come to my attention that somehow, the 3 most recent blog's photo links to photobucket have become broken. For anyone looking to see pics from the blog, a direct link can be found here:

Unfortunately you will have to manually look through all the albums on the left hand side, but I think I titled them in such a way as to match the blog about each.

Sorry for the hassle! 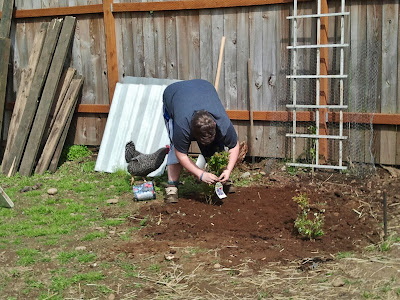 Happy valley sounds like a great place to have a farm right? In reality it's actually a pretty populated area. We got lucky to find a house with a decent sized back yard, so we decided to try our hand at larger scale farming on a micro scale. You'd be really surprised to discover the quantity of food you can produce in a not so large amount of space! It's been a work in progress, steadily growing, adding more and varied crops each season, and now we are up to 3 ducks and 5 chickens for egg purposes. We have 4 artichoke plants, a grape vine, 2 strawberry "bushes", a variety of herbs, and 3 blueberry bushes that stay each year to produce food for us and we usually have onions and many types of greens like mustards and kale going year round. We've also seasonally grown potatoes, garlic, eggplants, spinach, swiss chard, tomatoes, peas, beans, lettuce, broccoli, leeks, cardoon, amaranth, asian greens, brussels sprouts, and carrots. Our roommates have squash and some other veggies growing in the front yard as well. While not certified, we have been using pretty strict organic gardening methods and have also taken to limiting our watering to a minimum. Luckily Oregon is a perfect place for these kinds of practices because the weather allows the crops to thrive without much extra care.

Fowl Play:
Back when we started the garden and coop we had only 3 chickens. Our current roommates brought their 3 ducks when they moved in. Two chickens and a duck were unfortunately killed by a neighborhood dog that jumped our fence. We obtained two more chicks and they another duckling that we brooded in the house. The remaining adult chicken began to bully the remaining ducks so we had to re-home her. Once the new chicks and duckling were large enough to go outside we introduced them to the outside ducks and all was well for a little while. Then one night we discovered that some unknown creature killed one of the newly placed outside chickens. I had decided not to replace the birds anymore at that point, but then Casey and one of the roommates found a bantam hen running loose around the outside of the local Home Depot! They captured her and brought her home.

A few months later that hen went broody, refused to leave the nestbox as she was determined to hatch any and all other eggs being laid (literally the other birds were standing on her or beside her to lay their eggs in the box.) This hormonal broody state is normal and common with some chickens but can be dangerous for a non breeding hen because she stops eating and drinking and only poops once a day so she can be on the eggs at all times. If the eggs never hatch, she can become broody indefinitely. Therefore she must be "broken" by either letting her hatch a fertile egg(s), giving her some already hatched chicks, or by going through some laborious other practices. We decided to go the cute route and give her two baby chicks to raise. This time we decided to try and not get attached to them in case they became dinner to the local wildlife like their predecessors.

Now you can't just put the chicks in the pen with everyone else, chickens are very territorial and might attack the new "intruders". The actual preferred method of "grafting" chicks onto a hen involves waiting till the middle of the night while the broody hen is asleep on some eggs, reaching into the coop and swapping the eggs out with the chicks right under her. When she wakes up the next morning and voilá! "Her" chicks have hatched. Sounds like something right out of a cartoon, but it works.

It's been really entertaining to watch her mother these two chicks that are obviously not even the same breed. She is a tiny bantam and they are both from a full size breed. They only have half of their adult feathers and are almost the same size as her!

There are two galleries to look at for the photos, The coop build/garden in progress, and the harvest photos: 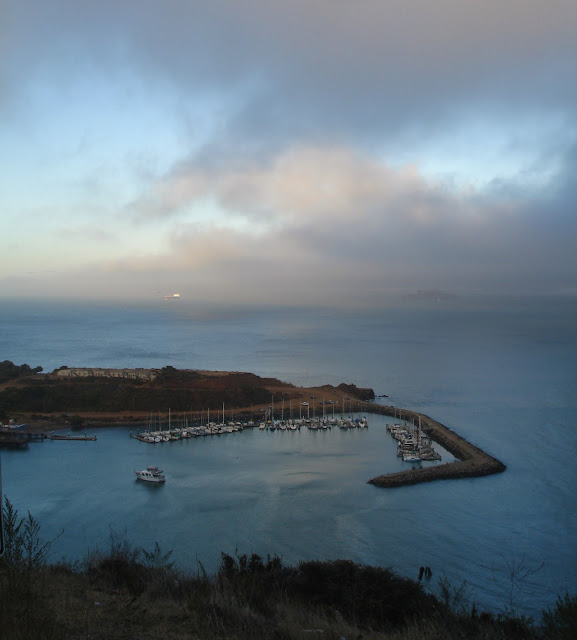 I'm happy to say shortly after the first trip to California I got an offer to go back down for another try. This time the pace was much more relaxed and there was time to explore some of the more naturalistic aspects of the USA's largest state. It was our roomies Shaun, Sy, and I, driving Shaun down to his California home for the school semester.

We explored this amazing pebble covered beach with immense rocks covered in tiny pits, some of which had pebbles trapped in them. We got to see tide pools with crabs, anemones, tiny fish, and I even saw an eel!

I made sure to go see the Golden Gate bridge this time around, it was pretty epic. The sun was setting and it was kind of foggy, just right for some interesting photos. Nearby, we accidentally stumbled upon an old abandoned military base which we explored and got some more interesting photos. That place was creepy, lots of cells and holding areas.

On the way back up it was getting late. We were broke and exhausted from driving so we decided to sleep in the car in the parking lot of our destination for the next day. Sy wanted me to see this wonderful kitschy "theme park" in the redwood forests called "Trees of Mystery." It was basically a person's property where they walked around looking for unique trees that they named and turned into attractions. There were also huge wood sculptures that illustrated a story as you walked toward the exit. They added hiking trails, a sky ride ski lift, and gift shop and started charging admission. It harkened back to the golden era of roadside attractions. It was an enjoyable way to spend the afternoon. I could definitely see how a young one could be enchanted by the place, and I got a kick out of too.

The Redwood forest is most certainly my favourite spot in CA thus far. I would go back to that grand beauty in a heartbeat. Thanks California for showing me your better side :)

It's all good, until its not: San Francisco- a comedy of errors 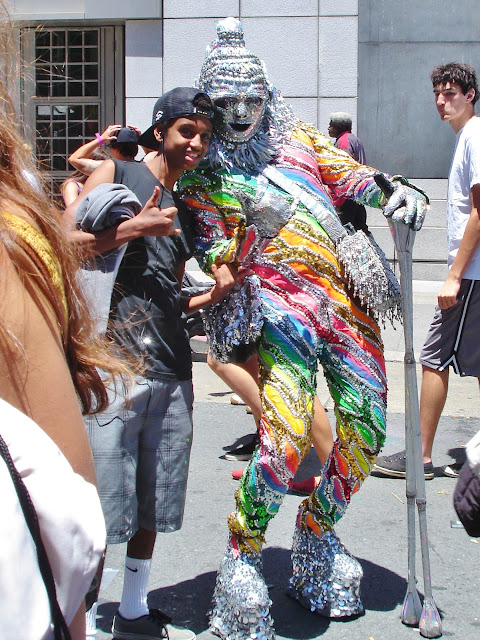 No, I don't know any of those people in the photo above, but I thought it was an interesting moment so I couldn't resist capturing it. It kinda sums up my very first trip to CA, "interesting."
I had a pretty good time, but the whole trip was plagued with issues and setbacks that kinda put a sour spin on the whole thing.

Here were the ups:

-Traveled with an awesome crew of Q's: Casey, Jake (casey's brother,) Dono (Jake's frat brother,) and our friends Shawn and Teddy.
-Saw some beautiful scenery
- Encountered some colorful characters at SF Pride
-Got to hang out with my longtime best buddy Alia
-Saw sealions up close in Santa Cruz (best place we went by far)

Here were the downs:

-Van got a flat tire on the way down with no spare and only one expensive tire shop near by.
-Got trapped on a bridge that night in CA behind a traffic accident for over 3 hours putting us at our campsite in complete darkness. We didn't bother setting up tents, Casey and I slept in the van and the others just laid out their sleeping bags on the ground.
-When we got to our hotel we found out they wouldn't let us all share one room and they didn't have any other rooms available (we booked several months in advance since pride draws thousands to the area and nowhere else nearby has rooms.) We ended up driving a couple hours to Shaun's Moms' place and camped in their back yard.
-All but one of us became severely ill with fevers and sinus flu on the trip, me and Shaun were the hardest hit.
-I tripped and fell on the concrete at the Pride festival in shorts, skinning and busting up my knees pretty badly.

Wish I could say I enjoyed that trip to California. Better luck next time.

CLICK HERE FOR VIDEO - Remember to change the video quality to highest and turn up your volume! 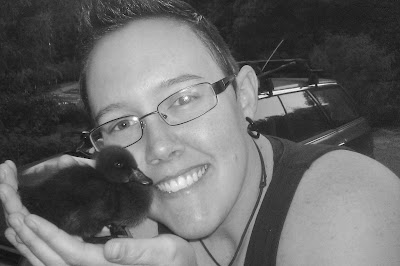 I can't believe it's been 8 months since I last posted a blog! Where does the time go?

That adorable duckling in the photo above is our roommate's. She lives in the back yard with two other ducks, the roomies' other chicken, and our 4 chickens. Hard to believe she is now fully grown and laying eggs! Talk about some serious time elapsing.

It just hit me that the most recent posting happened right at the end of last summer break. I never realized college was like a black hole! Time moves at its own pace in there, it's like light speed. It's summer break yet again, and now that I have some time to relax I can fill y'all in on the adventures that have happened since we last spoke.

It's funny, The first post in this batch is about last year's Pride celebration down in San Francisco. Casey's brother is down there literally right now for this year's Pride. We declined going this time around because we have several projects happening on the home front, but we know he's having a blast.

Brace yourselves for a blog inundation of awesome proportions! 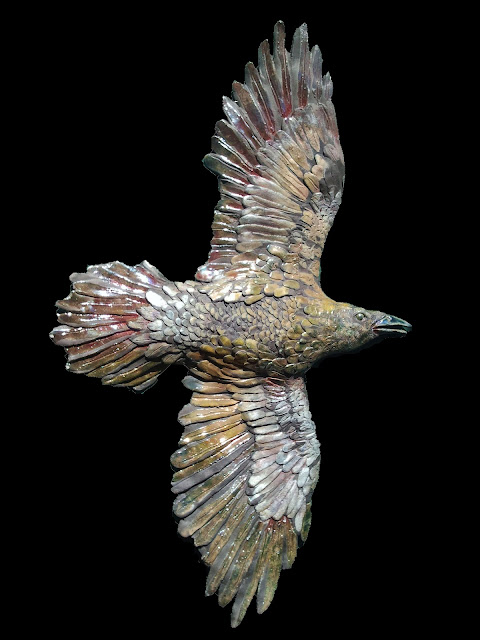 Some of the best things about college (for me) are the access to studio supplies and space in which to create. My other classes are great but the art department is where I feel most at home. I've been really digging ceramics lately, hadn't been doing that since highschool. Finding I'm much better at hand building now that I ever was before. I'm still pretty horrible at throwing on the wheel, maybe it's something I'll practice more now that I've got access to wheels. I've posted some pics of some work I've made over the last two terms (I'll post the stuff im making this term soon):

Many people know that I have been cutting hair for partners and friends for a few years now. I've only recently begun to document my adventures in the art of the 'do. Here are some of my more recent do's (including some rad dye jobs): 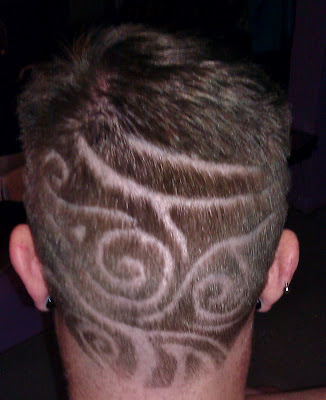 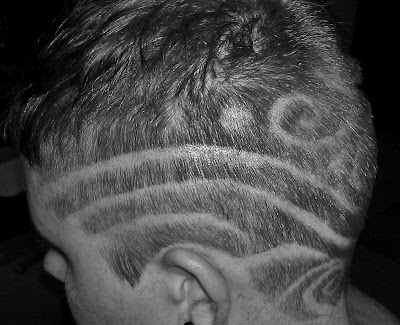 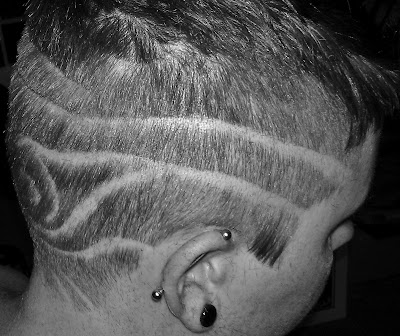 My first time with facial hair! 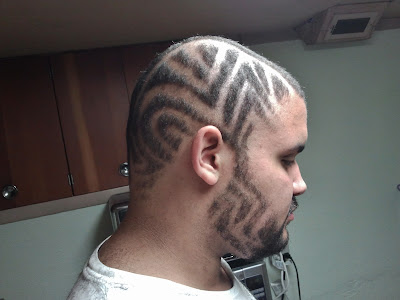 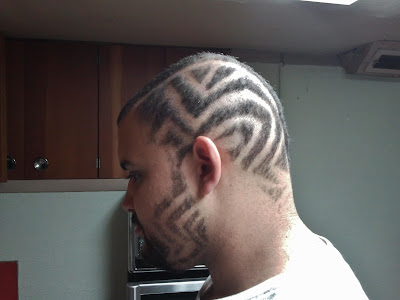 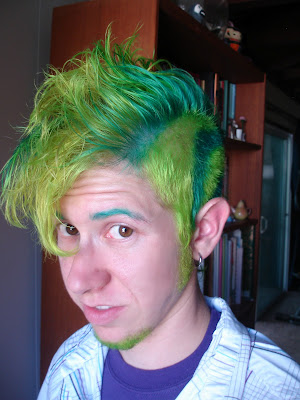 They both turned out swell! 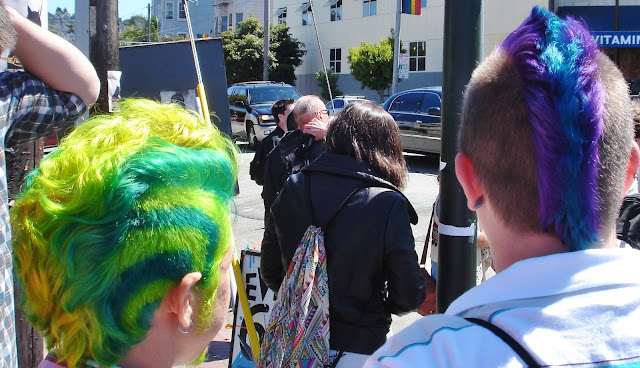 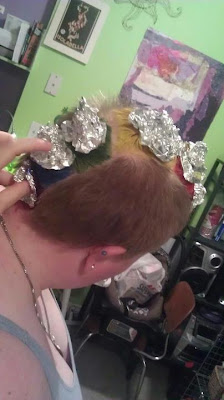 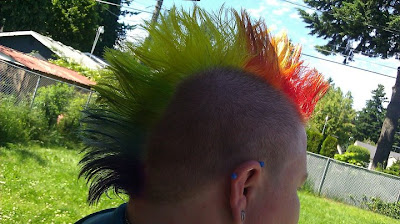